Texas Flip n Move Season 5, Photos during Filming the Show all of the Stars of Texas Flip N Move have a great time ding the set up and action during the process. In Season 5, new Auctioneers take the stage and showcase their talents and the house movers, well thats a holenother story. It gets as hot as a hornets nest in a hay baler during the bidding, when Randy gets as ornery as a rattlesnake in a coffer can he taunts the Snow Sisters and all they do is just laugh back at him.   Now Heather Kaspar sings another song as she encourages all the houses movers to buck up and bid along. Now Gary’s girls, Kendal, Melinda, Paige and Brooke always tales daddy’s advice but occasionally takes advice from Aunt Toni and Aunt Donna. Now Casey and Catrina just truck right along making waves in there own pond, a big pond that is, they do lot’s of handy work. The entire Texas Flip and Move crew wants you to enjoy season 5.

TexasFlipMove Photos Season Fine, The Snow Sisters have a conversation with Myers Jackson 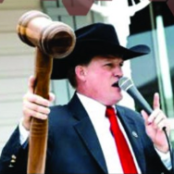